This speech was held by me in New York on the 27th of December 2017 on occasion of the Dreaming in Yiddish Award for Shura Lipovsky.

The lyrics of this song, written by Shura Lipovsky for the generation of her parents says it all: vund un vunder. The wound of  the massacre of the Jews and their culture in Europe and the miracle of the revival (without the help of the Messiah) of this culture. Today we are honouring Adrienne Cooper and many other remarkable Jews (and sometimes non-Jews) who brought Yiddish culture back to life. Alts iz vund un alts iz vunder, borves shprotst a royz in tir. At a certain moment roses began to sprout from the wounds, a miraculous rebirth.

Shura Lipovsky is the first European artist to be be awarded the Dreaming in Yiddish Award 2017, an Award in honour of Adrienne Cooper who died in 2011.

I feel very honoured to give you an impression of Shura’s work and background. I have to do it in 5 minutes which is already more than Twitter would allow and more than the one sentence that Hillel spoke when confronted with the question to explain the entire Torah while standing on one foot. So stand on both your feet. Here we go.

What happens if you are born in a non-Yiddish speaking family with a Jewish father who, as early as 1919, fled with his parents from Charkov (Ukraine) via Constantinopel, stayed in many different countries, finally ended up in France and who joined the resistance as a young student in World War II and smuggled Jewish children to Switserland; what if your father moved after the war to The Netherlands, The Hague, worked there as an engineer and married a non-Jewish woman whose family was connected to the resistance and the fate of the Jews; what if your mother was the one who brought you into contact with Yiddish culture, befriended Chana Millner (Dutch pioneer for the revival of Yiddish and Ladino songs) and rummaged flea markets in Paris to find Yiddish recordings; what if you are a sensitive girl and start singing these Yiddish songs, continue singing them and passionately devote your whole life to Yiddish culture, a culture that you were not born into?

Her presence is radiant, her laugh irresistable and she is always on the side of optimism and hope. She is a dove of peace but one who has weathererd the storm. She is not only a harmonizer but also knows how to fight. She is too Jewish not see reality for what it is. She is too Jewish not to make a radical choice for life. Knowing about darkness she always turns toward the light to make life bearable. She is not just a singer, but also a magid who in her workshops, masterclasses, meditations, and in her storytelling brings people to their inner core, their authentic voices and to their inner strength. Because that is what keeps us going.

Shura is part of Yiddishland: she works with, is inspired by and relates to collegues from the United States (among them the late Ruth Rubin), England, Israël, The Netherlands, Germany, France, Russia, Moldavia, Poland. Shura’s home base is Amsterdam and she also lives partly in Paris where she has directed a choir for more than ten years. She is a wandering Jew by choice. Her most recent artistic development was stimulated in the past by Chana Mlotek (z.l), who urged Shura to write her own songs, which she now does. This proves that Yiddish culture is alive and kicking and not only an archive, thanks to the characteristics of the culture itself that is about life and living. 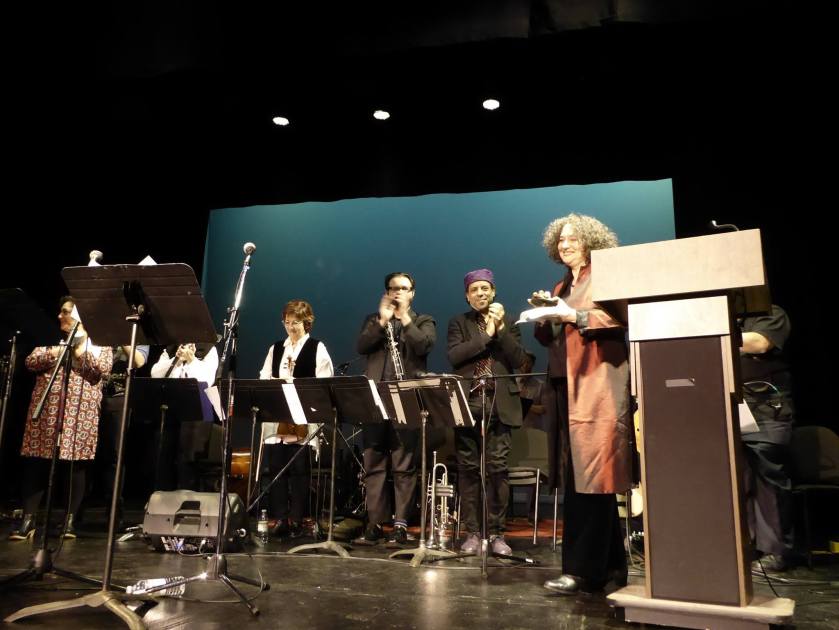 Shura started performing and doing workshops in The Netherlands in the ’70’s for a mainly non-Jewish audience that  knew hardly anything about the existence of Yiddish and Yiddish culture. It created a collective enthusiasm. When she was twenty three she collected Yiddish songs in a booklet ‘Mir lebn eybik’ and described the Yiddish songs as a musical historical archive. Her workshops at The Jewish Music Festivals in Amsterdam were always very well attended and soon she became an ambassador for Yiddish culture in The Netherlands and a trusted expert for bringing Yiddish artists to mainstream concert halls. In the ’90’s she toured with Zalmen Mlotek (NY) and Jeff Warschauer (Boston). They had rehearsels by telephone. Those were the days.

When you live in Europe and become a witness of the daily impact that the atrocities of the persecution of Jews has on your family and culture, then it is an act of courage to go to the country where the air is loaded with death and dying: Poland. It is also an act of courage for those few people in Poland who invited Jews to bring their culture back. So Shura was invited to give a concert in 1993 in the Warsaw Philharmonic concert hall (together with Zalmen Mlotek and Jeff Warschauer) on the occasion of the 50th Memorial of the Warschauer Ghetto Uprising; to sing for the unveiling of a monument for Mordechai Gebirtig and later the official opening of The Mordechai Gebirtig home in 2014.

In 2004 she had met Theodor Bikel (z.l) and Tamara Brooks (z.l) in Krakow during the Jewish Festival in Kazimierz . They shared the same passion for peace projects and right from the beginning of their meeting Theo and Tamara recognized Shura’s artistic qualities and also her sense of humour (even our wisecracking Michael Wex would be in awe of Theo’s and Shura’s joking for hours). A couple of years later they made a tour together in Poland with Mostar Sinfonieta (an orchestra from Bosnia with members from different religions).

What we, as people from The Netherlands, learned from the US mentality is not be excessively modest, and there is far more to say about Shura’s artistic career but let me quote Theo while you are still standing on two feet: ‘I can state without reservation that she is a superb performer whose respect for the material is exemplary. When Shura Lipovsky performs a song it has both lyrical and dramatic integrity. In her rendition each song becomes a mini-drama, a story exquisitely told and transmitted.’

From one generation to another, from one individual to a whole community, a modern Yiddish tribe, from traditional songs to new sparkling compositions, from a small country to the whole world, from dust and heaviness to new life.

This is the road to this Dreaming in Yiddish Award.

It is true: At a certain moment a rose is growing in the door. Borves shprotst a royz in tir.